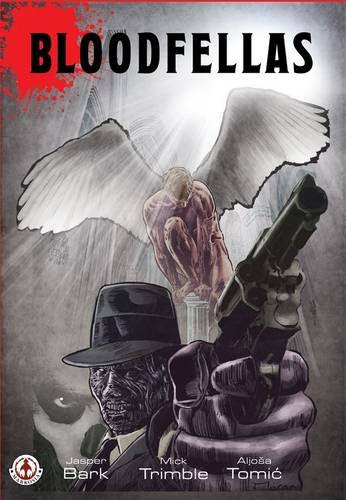 Bloodfellas, written by Jasper Bark, is my first graphic novel and I enjoyed it immensely. I read the ebook version, which looked stunning on my iPad. The artwork by Mick Trimble was fantastic and complemented the story beautifully. And what a story it was. Bark once again delivers a different take on zombies; this time combining the religious philosophy of voodoo with gritty noir gangsters. It is an odd pairing but Bark really makes it work. I was sucked into this dark and desperate world that he created where the dead have no rest and the living barter their souls. The book is set up as a collection of short stories that follow individual characters and a final story that ties all of the plot- lines together. I don't know if this is a common format for graphic novels or not, but it made reading the stories very enjoyable as you could see where different characters cross paths and how one story influenced another. I'm sure lovers of graphic novels will agree this is a great addition to the medium, and readers of novels will enjoy reading and looking at Bloodfellas. Bark's prose is just too hard to resist.

You can purchase Bloodfellas by clicking the following links: Amazon US, Amazon UK, Barnes and Noble, Waterstones

Peeper, by S.J. Smith, is the first book to come out from Sinful Press, which is a small, independent publisher. And books like this are why I like small, independent publishers. Peeper is erotica, but unlike the flooded BDSM market, this book caters more to male fantasies, and unusual ones at that. It is written in the first person and the main character, Jenks, who, although he very much loves his wife, finds himself in some unusual situations with a woman named Veronica who can't seem to keep her windows closed. With Jenks, Smith is able to pull off something difficult. Jenks is a lovable everyman. He is described very little physically, but the reader gets to know him (and his kinks) quite well, and all the while the plot is kept interesting and moving along even with an increasing number of sex scenes towards the end. Smith has a great writing style that had me immediately involved with the characters and their world. Peeper is filled with humor and doesn't take itself too seriously, which is why I think women will enjoy this one as much as men.  Smith is a skilled author and I can't wait to see what he comes out with next.

Peeper can be purchased by clicking on the following links: Amazon US, Amazon UK