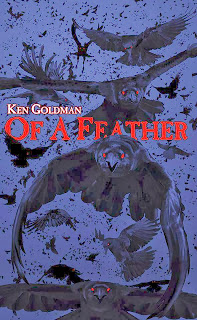 Anyone who reads this book that also suffers from ornithophobia will probably not want to leave their house for a week, and I'm sure they will suffer nightmares. As the title suggests, this book features birds, all sorts of birds, who are not our benign feathered friends. But they are not really what this story is about; it is about adolescence. That confusing time in everyone's life where things never seem to go smoothly. In fact, sometimes events lead up to make things go horribly wrong.

Of a Feather follows several central characters, and one thing I really enjoyed about Ken Goldman's writing style was that he gives equal time to each one. The reader gets to see the genesis of a psychopath, everything that leads up to him becoming a monster. On the flip side, Goldman also shows what happens to essentially good people who are pushed too far. And even though he is writing about a generation younger than my own, Goldman manages to capture everything that is universal about being a teenager. I think anyone of any age can relate to what these characters are feeling and thinking. The technology and slang might be different, but the emotional ups and downs will never change. Goldman fleshes these characters out quite well as we follow along a bloody horror story that will continue to haunt the reader long after they put it down.

This is Ken Goldman's first novel, but I hope it won't be his last. This is a solid, entertaining read, and I'm looking forward to seeing what else he will come out with in the future.


I give it four cocktails.

Click these links to purchase: Amazon US,  Amazon UK, Barnes and Noble